Are you a fan of classic honky tonk vibes? If so, Nashville, Tennessee is the perfect stop for your next weekend vacation! While Music City has so much more to offer than its local bar scene, the classic downtown Broadway vibe is something you won’t want to miss out on when you come to town next.

When it comes to planning your Nashville trip, you’re going to want to know about the best bar spots to start or end your night of celebrating. After a tour of the city with Tommy’s Tours, enjoy a nice cold cocktail that is built to suit your taste buds. Varying in price, scenery and drink options, we’ve compiled a list of some of the best downtown bar spots in Nashville, Tennessee.

Here are some local favorites located in Downtown Music City:

In downtown Music City, Jane’s Hideaway is a funky bar where you can find a variety of delicious, niche cocktails. Located in eclectic Printer’s Alley, you’ll find this bar amongst a variety of other local, hip clubs and drinkeries.

In the past, Printer’s Alley was a vibrant entertainment district in Nashville, and legendary artists like Jimi Hendrix and Willie Nelson performed there. Formerly Boots’ supper club, Jane’s Hideaway is now a great new, local bar. Known for its seasonal cocktail menu, made with local ingredients, and its comfort food, Jane’s is an important part of Printer’s Alley’s resurgence.

Robert’s Western World, a classic Lower Broadway honky-tonk, is one spot you won’t want to miss out on during your next trip. Previously home to a steel guitar manufacturer and a boot apparel store, Robert’s Western World provides guests with an authentic country vibe.

Staying true to the roots of the building, this classic honky tonk still features both steel guitars and country style boot decor. If you’re seeking a bar that features live country music open to close, then Robert’s Western World is the place to be. Grab a fried bologna sandwich and a cold beer to satisfy your inner country star!

VISIT TOMMY’S TOURS AND SEE A NEW SIDE OF NASHVILLE, TN!

When you’re cruising down Broadway, it’s hard to miss Honky Tonk Central since it occupies three stories and a full corner of prime downtown real estate. Offering three different levels of pure country partying, Honky Tonk Central hosts a different band on each unique floor, incredible views of Lower Broadway, and vibrant energy all around. If you’re looking for a more classic party vibe, but you don’t want to traverse through Downtown Broadway, Honky Tonk Central has so many options and energies to choose from throughout your night.

A popular spot called Famous Nashville can be found right off Lower Broadway on 2nd Avenue. The rooftop bar and pub at this trendy location features sights you’ll not want to miss while you’re in town. Facing the Cumberland River and Nissan Stadium, you can catch views of almost the entire city, and maybe even a glimpse of a Titans game! Rain or shine, you can enjoy a delicious cocktail and snack on the partially covered rooftop section.

Located in the heart of Downtown Broadway, Nashville’s Nudie’s lays claim to the longest bar on the street. This legendary honky-tonk is 100 feet long and decorated with thousands of silver dollars. Observe million-dollar collections of country music memorabilia made by Nudie Cohn, who dressed stars like Johnny Cash, Hank Williams, and Elvis Presley. Nudie’s offers tourists and locals alike a Nashville Broadway vibe unlike any other.

A local favorite amongst the classic Broadway bars and pubs, Tootsies is a rowdy, Honky Tonk legend. The Tootsies Orchid Lounge opened in the 1960s and has been a favorite of music lovers ever since.

This bar and lounge also includes a trendy rooftop bar now as well. With food options, classic cocktails and more, you’ll truly get a feel for the Downtown Music City vibe at Tootsies. If you don’t make it to this hip spot on your trip, you can also get a taste of Tootsies at the Nashville airport.

Tommy’s Tours, guided by Comedian Charmin’ Tommy Garmon, are a fun-packed, three-hour, Nashville bus tour of Downtown Nashville’s hotspots and celebrity homes. The tour will pick you up at your hotel and drop you back off in the same spot.

Tommy’s Tours have the newest buses, newest equipment, and the best air conditioning!  See the city as only Tommy can show it. Tommy’s Tours will make sure you “Don’t just show up, you arrive…” Tommy is Nashville’s only independent tour owner and operator, and he gives his tours a beaming “Smile a Mile,” telling “Everything you need to know about Nashville.” If he doesn’t tell you about it, you don’t need to know! 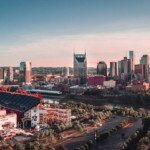 6 Things to do Downtown NashvilleUncategorized